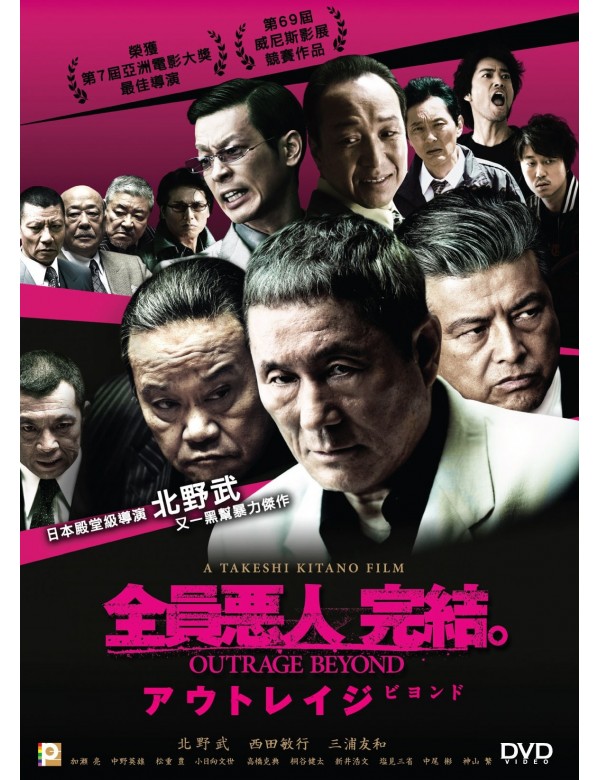 HKD$39.00
Outrage Beyond
Director
Takeshi Kitano
Cast
Takeshi Kitano
Yutaka Matsushige
Ryo Kase
Toshiyuki Nishida
Tomokazu Miura
Hirofumi Arai
Sansei Shiomi
Fumiyo Kohinata
Synopsis
After "Outrage" in 2010, Director Kitano comes back with a more violent and bloody sequel - "Outrage Beyond"! The Sanno crime family has grown into a huge organization, expanding its power into politics and legitimate big business. The Sanno's upper ranks are now dominated by young executives, and the old-guard members with mounting resentment are being pushed to the sidelines. This vulnerable spot in the Sanno hierarchy is exactly what anti-gang detective Kataoka has been looking for, as the police force prepares a full-scale crackdown.
With secret plots and dirty tricks, the ambitious Kataoka instigates conflict between the Sanno and their long-time ally, the Hanabishi, in the hopes that they ultimately destroy each other. With the sense of approaching yakuza warfare, deception and betrayal smolder among the families as everyone watches out for the other's next move. It's impossible to guess who will come out on top in this fierce power game. It's not over until it's over.