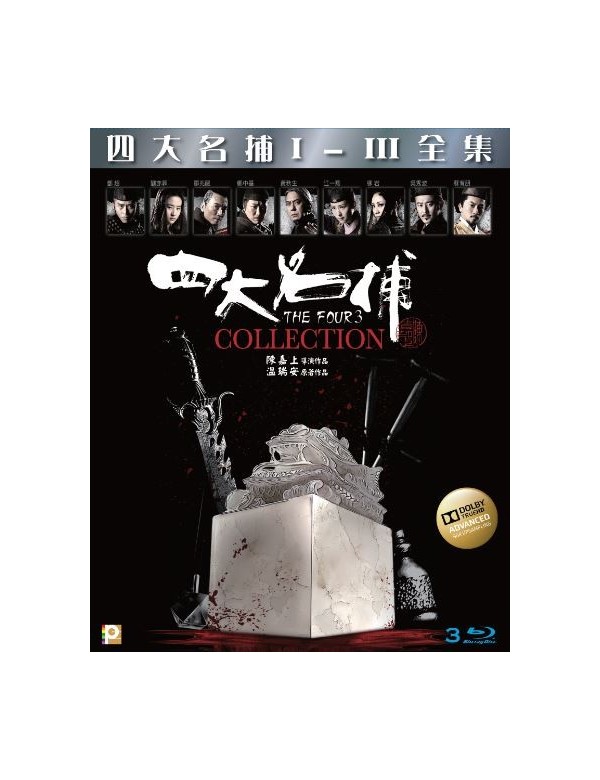 Synopsis
The Four
When counterfeit bills appear in the capital city of the Song Dynasty, the court-run Six Fan Gate Constabulary and the independent Divine Constabulary are assigned to investigate. Coldblood of Six Fan Gate is sent undercover to Divine, Where he befriends fellow independent constables Life Snatcher and Iron Hand, as well as the beautiful Emotionless.Emotionless discovers Coldblood’s identity but growing affection between the two keeps her from telling anyone. Coldblood causes the shut down of Divine but before he has time regret it he becomes involved in a battle against God of Wealth who plots to overthrow the government.
The Four II
When the four constables of the Divine Constabulary investigate a murder in the suburbs, they unexpectedly stumble on clues to the murder of Sheng Ding Tian's family 12 years ago. While investigating the case, the constables discover facts about their past, facts they all would have preferred to keep hidden, and facts that force them to choose between old grudges and their new lives at the Divine Constabulary.  And after a series of bloody battles confront them as the case unfolds, an undeniable fact becomes clear – even if they survive this storm, a bigger one is brewing just over the horizon.
THE FOUR III
The reputation of the Four constables survives, but since Emotionless's departure, there have been changes at the Divine Constabulary.  The Four rescue Zhuge Zhengwo from An Yun Shan's mountain fortress, then with the Emperor and Di armies, they attack.  But An Yun Shan absorbs their power, which means the constables and their allies now face their most lethal opponent yet, a nearly invincible kung fu master who won't stop until he has absolute power......