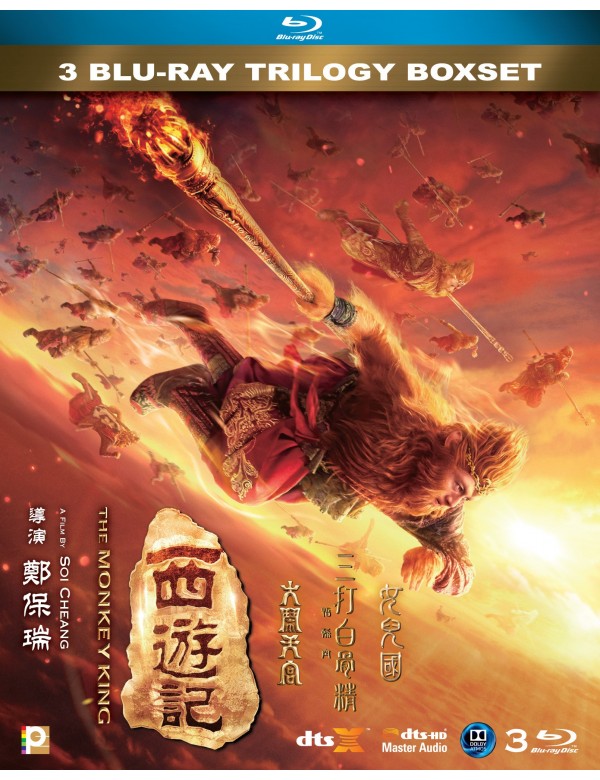 
Synopsis
Since the beginning of time, there existed in the world three clans; human, god and demon. As everything was destroyed during the great battle, Nuwa (Goddess of Works) used 36,500 magic boulders to repair Heaven. One of them fell accidentally down onto Earth and landed on the Mountain of Flowers and Fruits on an island far across the Eastern Sea. Over thousands of years, the magic boulder absorbed the energies of Heaven and Earth and the sacred lights of the Sun and Moon. A godly creature was nurtured inside the stone-egg and a full-grown monkey burst out from it one day. When the Patriarch Subodhi passed by on his way to collect herbs in the Mountain, he came upon the monkey. Impressed by his exceptional wit and godly airs, he took the monkey back to the Divine Cave of Three Stars in Mountain Mi to teach him the Way and called him Sun Wukong…

Synopsis
500 years after the havoc in heaven, Xuanzang, the Tang Priest, is appointed by the Buddha to go to the West to fetch the Buddhist scriptures. By accident, Xuangzang undoes the Buddha’s spell on Sun Wukong, the Monkey King. Wukong brought under control by a gold hoop given by the Mercy Goddess. He has no choice but to accept the mission to escort Xuanzang to the West. Despite his reluctance, Wukong cuts paths all the way and dutifully helps to subdue Bajie and Sha. But the hoop on this head, effective with his master’s restrictive incantation, always remains a vexation for Wukong.

Lady White Bone Spirit from the White Tiger Ridge aims to kill and eat Xuanzang’s golden body for evading her doom of reincarnation from a demon to any other creature. After dealing with the four, White Bone Spirit has an insight into the barrier between Wukong and Xuanzang. So she designs traps to foment discord between them. Humiliated mistakenly, Wukong still fights on with both strength and wit. But Xuanzand can’t see through the real identity of White Bone, and their relationship is thus broken off as she planned...

Wukong tries to save the three with his almighty transforming sorcery, when Xuanzang gradually loses his stand to falls in love with the Queen. The trespass of the four outsiders also agitates the God of River Oblivion (by Lin Chi-Ling), who completely breaks the peace of the Womanland. The River God floods the whole nation in a fury and puts it at risk of total destruction. What decision would Xuanzang make between loving an individual or all sentient beings? How could the Monkey King fight to subdue the River God and rescue his master and brothers out of their trouble of love? What could the Queen and the Preceptor do to save their people from this crisis?
PANCB1804172