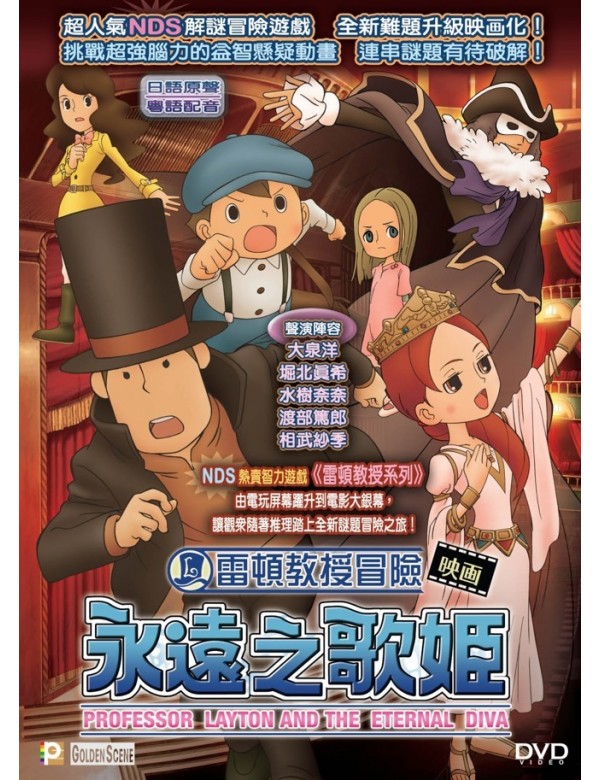 Synopsis
Layton is invited by Janice to attend an opera in which she is performing, centered around the legendary lost land of Ambrosia and the secret of eternal life it claims to hold, which it is claimed will be rediscovered when its queen returns. Janice believes recent strange occurrences are somehow connected to the opera: in addition to girls disappearing from London, the opera's composer Oswald Whistler has recently adopted a young girl who has claimed to be Whistler's deceased daughter, and Janice's friend, Melina, restored to life. Layton and Luke attend the opera at the Crown Petone opera house, built on the White Cliffs of Dover, and witness Whistler play the entire piece on an elaborate one-man orchestra machine known as the Detragan. Once the opera is complete, however, a mystery man (speaking through a marionette), informs the audience that they are to play a game, the winner of which will receive the secret of eternal life. The Crown Petone is revealed to be a ship, which breaks off from the cliffs and sets sail to isolate the "game", after which the mystery man unveils a series of timed puzzles intended to progressively eliminate the players until one winner remains. The puzzles challenge the players to find "the oldest thing they can see", then go where they can "see the largest crown", but Layton's prolific puzzle-solving prowess allows him and a group of eleven others to quickly deduce the answers (the sky and the Crown Petone itself, respectively). To "see the largest crown", the group leaves the ship in two lifeboats, rowing out to a distance from which they can see the whole ship, at which point the lifeboats start moving on their own, taking the successful players to their next destination.