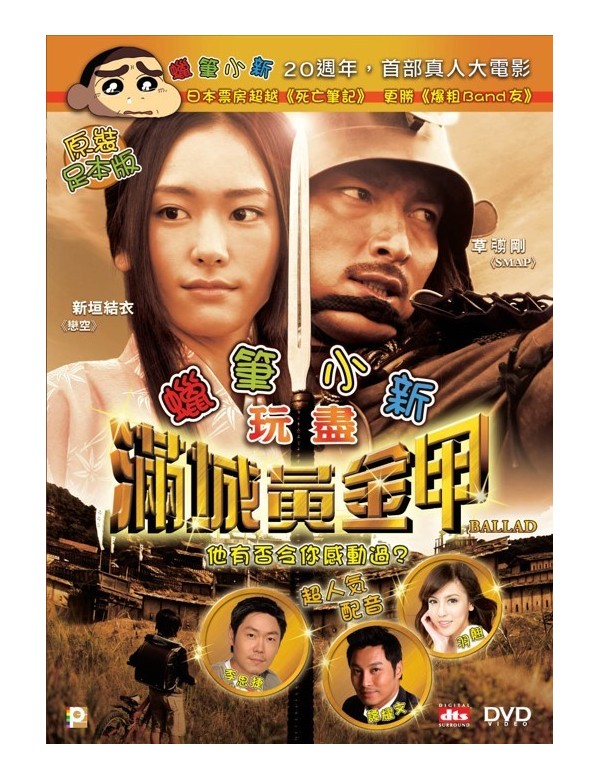 HKD$19.00
Title: Ballad
Director: Keiichi Hara
Starring: Yui Aragaki,Tsuyoshi Kusanagi
Type: JAPANESE
Genre: DRAMA
Category: IIA
Year: 2009
Synopsis:
Crayon Shinchan, the comical kid who used to bare his buttocks, is going to drop his tears in this live action film. 1574, Feudal Japan. Samurai Matabei Ijiri (Tsuyoshi Kusanagi) pledged his life to protecting the Kasuga kingdom and its beautiful princess Ren (Yui Aragaki). Despite deep feelings for one another, the princess and the warrior could never transcend their respective roles as master and subject. One day, when an enemy foot soldier’s bullet would have brought Matabei down, a miracle occurs. A young boy appears out of nowhere and gives the foot soldier a start, throwing him off target and saving Matabei’s life. The boy’s name is Shinichi Kawakami (Sho Takei) and he claims to have slipped back in time from the future. Princess Ren orders Matabei to look after Shinchi.Although reluctant at first, Matabei slowly opens up to the earnest Shinichi, and the two begin to form an unlikely friendship. When Lord Takatora Okurai (Takao Osawa) asks the beautiful Princess Ren to marry him and promises to protect Kasuga in return, despite their love for each other, Princess Ren and Matabei must bury their feelings and acquiesce to the political marriage. Meanwhile, Shinichi’s father Akira (Michitaka Tsutsui) goes searching for his missing son and finds a crumbling letter under a huge tree named "the Giant Kawakami Oak". Written in Shinichi’s handwriting are the words, "I’m writing you from the Tensho Era."