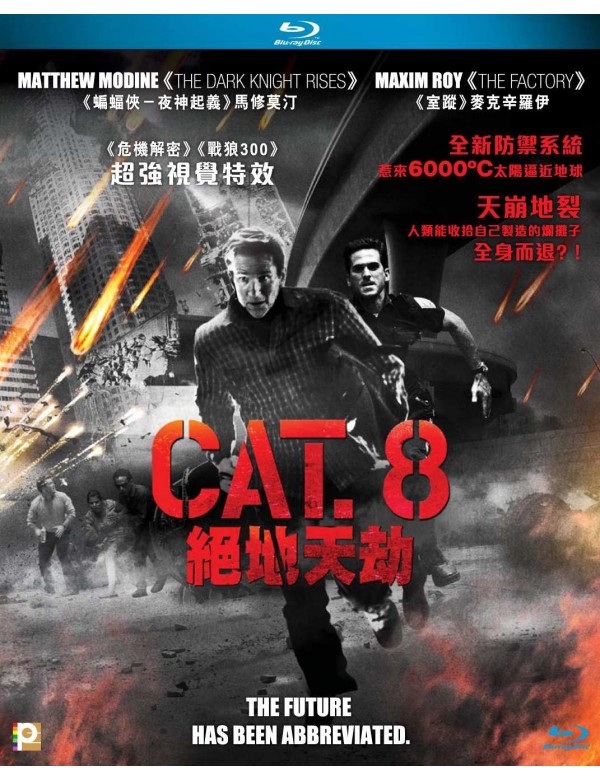 HKD$49.00
Title: CAT. 8 (Blu-ray)
Starring: Matthew Modine
Francis X. McCarthy
Type: ENGLISH
Genre: Disaster
Year: 2013
Synopsis:
The Military Advanced Defense Agency's Dr. Jane Whitlow (Maxim Roy) has unveiled the world's most advanced global security system: a space-based interceptor that can harness the unlimited power of the sun and, if necessary, release an A-class solar flare against any threat. This program is quickly celebrated as the future of global defense, until an unanticipated accident triggers an unimaginable consequence. A solar flare that bombards our planet with electromagnetic impulses, and with it comes a wave of disaster. But the greatest threat yet is a squall of fiery sleet hurtling towards Earth guaranteed to end all human life on the planet.
Civilian scientist Michael Mitchell (Mathew Modine), now laboring out of his ad-hoc lab in Boston, knows the danger in messing with the sun's power. It's the reason he destroyed the original program years ago—and Jane knows he's the only man who can help. But they're up against insurmountable odds. In only a matter of hours, the atmosphere will be ignited. Even if Michael can reverse the oncoming threat, the after-effects are something even he couldn't have predicted. As chaos reigns across the globe, as government officials relinquish all hope, the countdown to the end of the world begins.