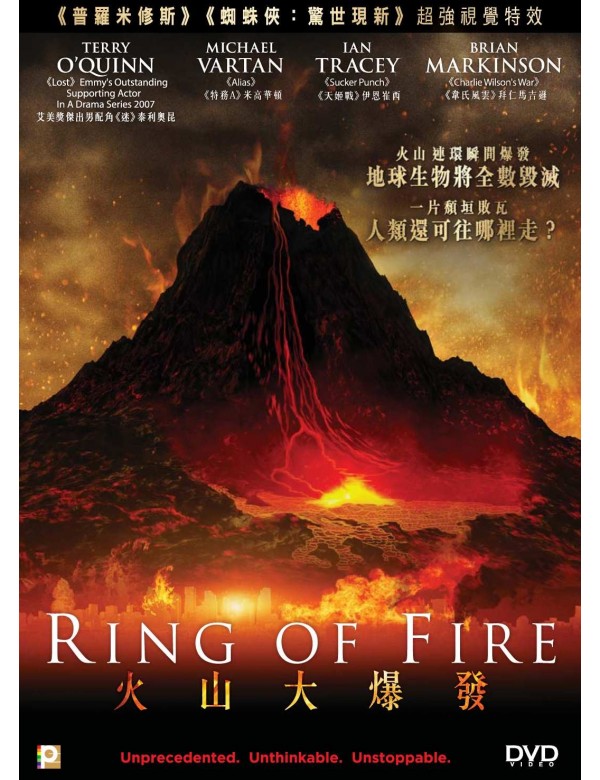 HKD$19.00
Ring of Fire
Director
Paul Shapiro
Cast
Terry O'Quinn        (Lost) Emmy's Outstanding Supporting Actor In A Drama Series 2007
Michael Vartan      (Alias)
Ian Tracey              (Sucker Punch)
Brian Markinson    (Charlie Wilson's War)
Synopsis
Impassioned environmental activist Emily Booth lost a lot for her beliefs–including her son, Caleb, in a bitter custody battle, and the loyalty of her father, the avaricious owner of Global Oil. Just when it couldn't get worse, she discovers with the aid of former analyst Matthew Cooper that her father's clean drilling record is a sham. When the company's state-of-the-art laser drill accidently reaches a dangerous mass of magma, it unleashes a series of tremors that rock the small town of Maple Glen. Then, the unthinkable becomes a reality—a volcanic eruption that blackens the sky in ash, spreading panic and death and trapping young Caleb in the devastation.
But as Matthew fears, this is just the beginning of a domino effect that carries catastrophic worldwide implications—a connected volcanic system stretching from Yellowstone to Indonesia that, in a perfect storm of eruptions, could literally wipe out the planet. As Emily struggles to find her son, Matthew figures out how to stop the global eruptions: to puncture a new hole with sonic explosions and channel the magma into the ocean, yet it's a suicide mission.

14 other products in the same category: