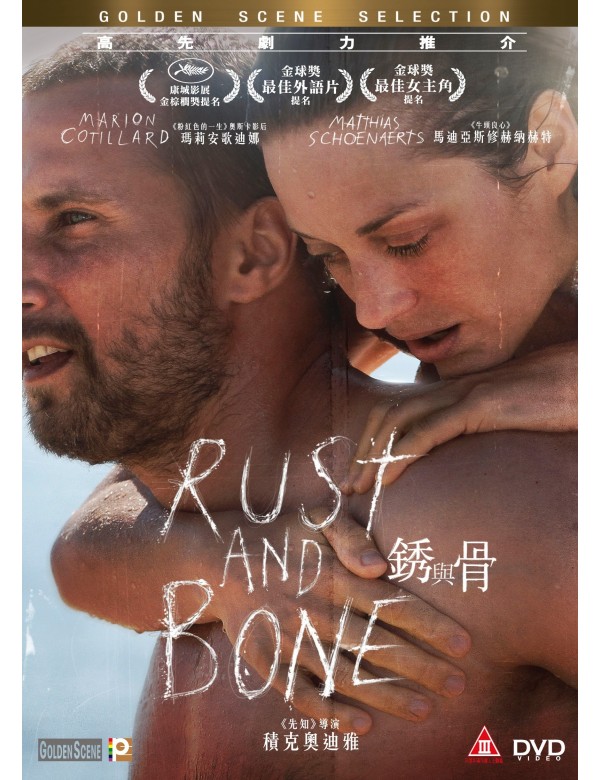 HKD$19.00
Rust and Bone
Director
Jacques Audiard      (Dheepan)
Cast
Marion Cotillard           (La Vie en Rose)
Matthias Schoenaerts (The Danish Girl)
Synopsis
ALI (Matthias Schoenaerts) finds himself with a five-year-old child on his hands. SAM is his son, but he hardly knows him. Homeless, penniless and friendless, Ali takes refuge with his sister ANNA in Antibes, in the south of France. There things improve immediately. Ali, a man of formidable size and strength, gets a job as a bouncer in a nightclub. He comes to the aid of STEPHANIE (Marion Cotillard) during a nightclub brawl. Aloof and beautiful, Stephanie seems unattainable, but in his frank manner Ali leaves her his phone number anyway. Stephanie trains orca whales at Marineland. When a performance ends in tragedy, a call in the night again brings them together.
When Ali sees her next, Stephanie is confined to a wheel chair : she has lost her legs and quite a few illusions. Ali's direct, unpitying physicality becomes Stephanie's lifeline, but Ali too is transformed by Stephanie's tough resilience. And Stephanie comes alive again. As their stories intersect and diverge, they navigate a world where strength, beauty, youth and blood are commodities-but where trust, truth, loyalty and love cannot be bought and sold, and courage comes in many forms.