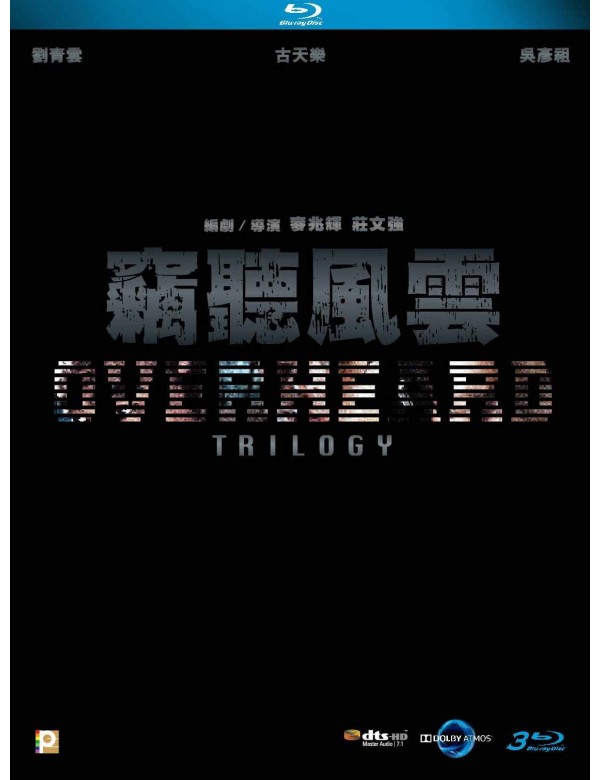 HKD$159.00
Overheard 3
Director
Alan Mak                (The Silent War)
Felix Chong           (The Silent War)
Cast
Lau Ching Wan     (The White Storm)(Life Without Principle)
Louis Koo               (Wild City)(Don't Go Breaking My Heart)
Daniel Wu              (Don't Go Breaking My Heart)
Zhou Xun                (Womwn Who Flirt)
Synopsis
Overheard
A major stock exchange in the world, Hong Kong attracts not only money but, also many who try to main pulate the market. The interception team at the Criminal Interlligence Bureau is sent in to investigate a listed company. Led by Inspector Johnny Leung (by Lau Ching Wan), the team has veteran cop Gene Yeung (by Louis Koo) and the young rookie Max Lam (by Daniel Wu). They infiltrate Feng Hua International to install interception devices and start to monitor the company's phone traffic. Overhearing about the management's plan to boost the share price. Gene and Max, who are desperately in need of money, find themselves irresistible to such golden chance of fortune. One critical decision leads the three into a turbine of crimes with no going back...
Overheard 2
LAW Man-seng (Sean Lau) a reputable security dealer was involve in a car accident. Police officer HO Chi-keung (Louis Koo) is assigned to the case when military surveillance devices were found in LAW’s wrecked sports car. During the investigation, Ho finds that Law has some offshore funds of unknown sources and that an unknown person Joe (Daniel Wu) is wiretapping not only Law, but other members of ‘Landlord Club’, a legendary club with members from top business tycoons and entrepreneurs in town.
Overheard 3
LAW worked as a chauffeur for the rural tycoon LUK; was jailed for killing a major land owner in a car accident. It was rumored that LUK was behind such land owner's death, which gave LUK a competitive edge in the native apartment development deal. Every native, male resident in the New Territories was granted the right to build a house, until recently the government decided to gather all of the remaining land rights from these residents and plan to build taller apartment buildings. LUK wished to swallow the enormous project and this started the fights between LUK, the land owner and other real estate developers.
LAW gets out of prison 5 years later, LUK's corporation has grown more powerful, while LUK's right-hand man Keung, sworn brother of LAW, has his own agenda to pursue. But things take a surprising turn. With the help of LAW's prison mate and computer whiz Joe, he modifies their mobile phones for wiretapping. Joe gets acquainted with the materialistic single mom Eva, who turns out to have a dark history with both LAW and KEUNG. Through the eavesdropping, LAW realizes Keung's ultimate plan, which may change Hong Kong's land development forever.