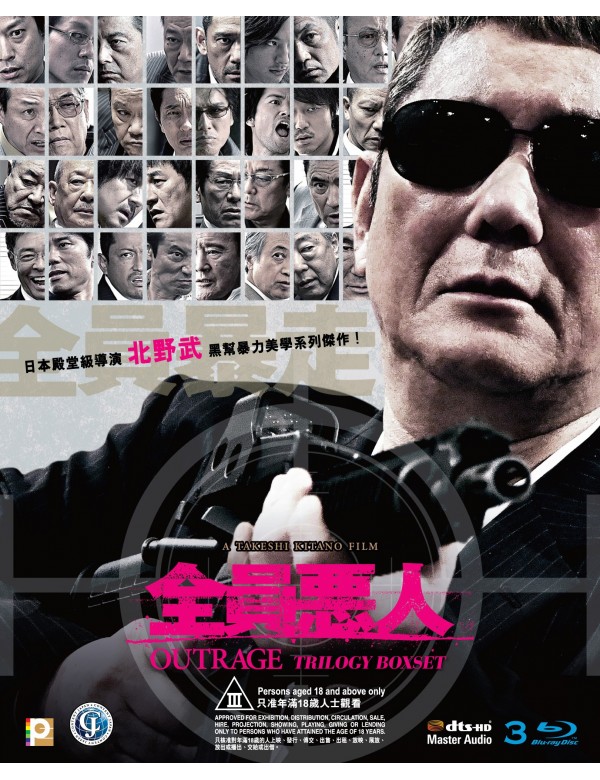 
Synopsis
Takeshi Kitano returns with extreme violence. Several subsidiary bosses gather at a lavish lunch with "Mr. Chairman", the head of the ruling Sanno-Kai yakuza organization which controls the Greater Tokyo area, Sanno-Kai underboss Kato warns Ikemoto about his overt dealings with family outsider Murase, an old-timer with whom he recently made a pact in prison. In an effort to ease Mr. Chairman's suspicions, Ikemoto asks fellow boss Otomo to do his dirty work for him by making a minor but obvious move against Murase. Otomo's actions are the start of a ruthless series of conflicts and betrayals. Before long, several yakuza clans are out for blood in their constant battle for power and money. The rival bosses fight to rise through the ranks by scheming and making short-lived alleglances. In this corrupt world where there are no heroes, It's a Bad Guy vs. Bad Guy in a spiralling outrage of gang warfare...

Synopsis
After "Outrage" in 2010, Director Kitano comes back with a more violent and bloody sequel - "Outrage Beyond"! The Sanno crime family has grown into a huge organization, expanding its power into politics and legitimate big business. The Sanno's upper ranks are now dominated by young executives, and the old-guard members with mounting resentment are being pushed to the sidelines. This vulnerable spot in the Sanno hierarchy is exactly what anti-gang detective Kataoka has been looking for, as the police force prepares a full-scale crackdown.
With secret plots and dirty tricks, the ambitious Kataoka instigates conflict between the Sanno and their long-time ally, the Hanabishi, in the hopes that they ultimately destroy each other. With the sense of approaching yakuza warfare, deception and betrayal smolder among the families as everyone watches out for the other's next move. It's impossible to guess who will come out on top in this fierce power game. It's not over until it's over.

Synopsis
The yakuza war between two giant families, Sanno of the east and Hanabishi of the west, ended with Hanabishi as the victor. Immediately after the turmoil, yakuza outcast Otomo (Beat Takeshi) crosses borders to South Korea, under the secret protection of Chairman Chang, a longtime ally to Otomo and a renowned fixer whose influence encompasses both Japan and South Korea.
Years pass with the arrogant Hanabishi further flexing their powers. A Hanabishi executive named Hanada (Pierre TAKI) makes a casual trip to South Korea, where he raises a ruckus by killing a pimp, who happens to belong to Chang. The incident brings immediate tension between Chang and Hanabishi, while a power struggle between Hanabishi chairman Nomura (Ren OSUGI) and his first underboss Nishino (Toshiyuki NISHIDA) is escalating at the same time. Otomo couldn't have picked a better time to be back to Japan - to settle all scores once and for all…
PANJB1808091