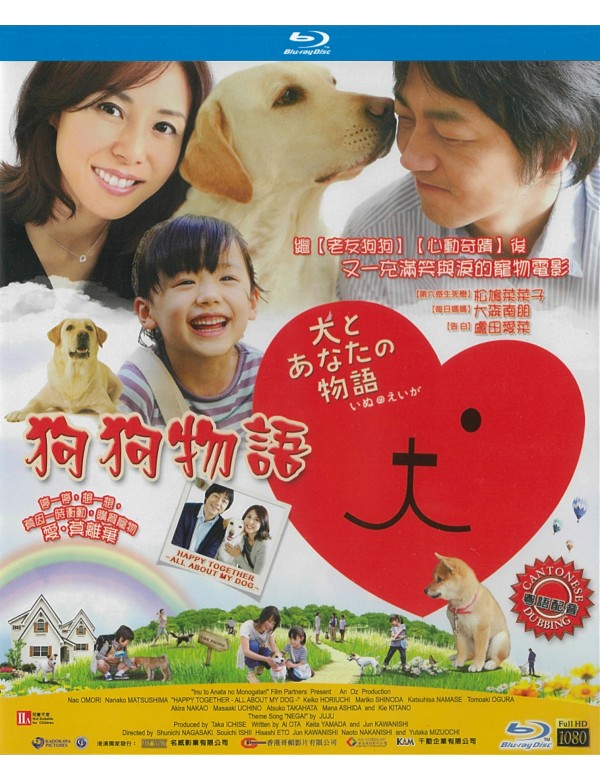 Happy Together - All About My Dog - (Blu-ray)


Synopsis
The Dog's Name Translator Ichiro Tadano (Nao Omori) cared for a dog named Jiro as his brother, but the dog killed in a car accident. His wife Misato bring home a Labrador dog name Lucky, Ichiro opposes the idea, but Misalo insists they the dog. Akira! An actor Akira Nakao (Akira Nakao) with unhappy face to drinking coffee in a scanic open cafe. Two waitress are excited watching him. At that time, a woman's voice saying "Akira" echoes throughout the care, because Akira does not listen to her. That brings unexpecting disaster to the actor Akira Nakao... Visits to Dog Lovers "Visits To Dog Lovers" is a popular TV program all over Japan. Today's guest is Sudo (mariko Shinoda) who owns a smart dog. Sudo insists her dog Billy memorizes words and objects. At that time, Sudo does do something to make people suprised not Billy. The final episode of program includes. Dog Nap A kidnapping case occurs. Detective Watanabe got a threatening call from a kidnapper. Under the urgent situation, picture shows up the dog is kidnapped not the girl. Meanwhile the kidnapper is fascinated with the hostage. But two dog-lovers get involved and the case goes into a different direction. Mother's Anxlety During her son's wedding reception, Michiyo (Atsuko Takahata) can't enjoy herself. She worried about her dog Kisses. Kisses has never been alone before. If Kisses opens a drawer with a knife in it or...? Her imagination goes wild.... Vanilla Fragments Natsuko's (Kie Kitano) dog Vanilla died. The dog in the park reminds Natsuko of Vanilla. Natsuko asks the dog owner to take a walk together and because of words imparted by the dog owner Natsuko can smile again.