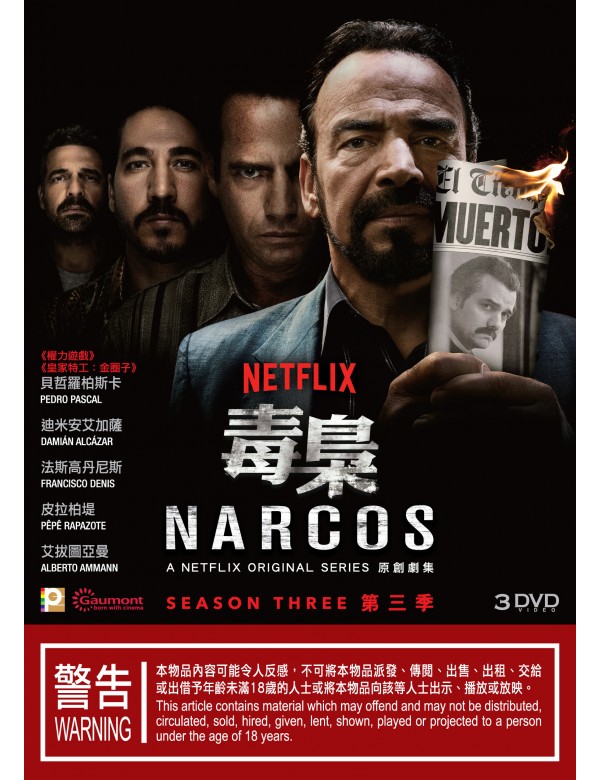 A Netflix Original Series
Synopsis
Season 3 brings cocaine and the war on drugs closer to home as Cali expands its operations inside America’s borders and invites dangerous new partners into the cocaine business: the Mexican North Valley Cartel. The Cali Cartel becomes the largest drug trafficking group in the world and designs an exit strategy that will allow them to live happily ever after. Cali Godfather and leader Gilberto Rodriguez negotiates a surrender with the Colombian government where they will receive minimal prison sentences, but maintain their fortunes and legitimate businesses. All they have to do is not get caught for 6 months… Set opposite the Cali Godfathers is the story of Jorge Salcedo, the head of security for the Rodriguez brothers, who eventually works as a DEA informant tasked with toppling the largest drug syndicate in history. Salcedo risks his life to reveal the inner workings of the cartel in an effort to bring down Miguel Rodriguez, the newly christened patriarch. The season culminates with the failure of Cali’s plan in a collision of betrayal and hubris. Peña arrests both Miguel and Gilberto Rodriguez and the remaining two Godfathers surrender to Colombian police. But Cali’s reach far surpassed even Peña’s wildest imagination. A successful Cali attempt to buy the Presidency of Colombia will come to light, yet Peña’s hands will be tied as the US Embassy wants no part in revealing the truth. Peña and Salcedo successfully wrangle Cali’s chief accountant who testifies about their operation, ensuring long sentences in US prisons for the formerly untouchable Godfathers of Cali. Yet it is not enough for Peña, who leaks the truth about President Samper’s Cali connections to a Colombian newspaper, resulting in his resignation from the DEA.