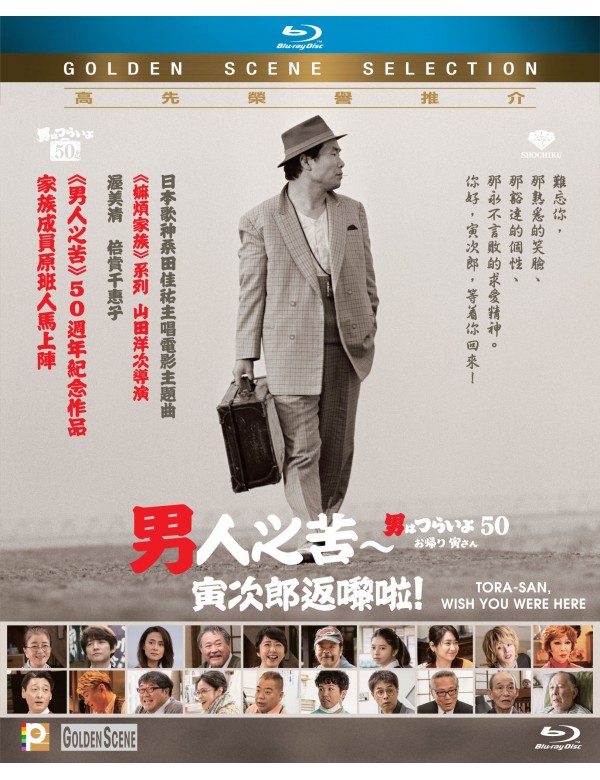 Tora-san, Wish You Were Here (Blu-ray)

HKD$159.00
Tora-san, Wish You Were HereSynopsis
On the sixth anniversary of the death of Mitsuo Suwa’s wife, a memorial service is held at Kurumaya, formerly a long-standing traditional confectionery store on the approach to Taishakuten Temple in Shibamata. It has been reborn as a modern cafe, but the living quarters in the back remain unchanged.
After the service, the conversation inevitably turns to lively reminiscences of the past, especially the many times that Torajiro, a travelling salesman and the black sheep of the Kuruma family, brought his latest unrequited love interest back with him, sending the house into an uproar... Half a century has now passed since Torajiro, fondly (and not-so-fondly) referred to as Tora, first returned to Kurumaya after leaving home in his youth.
Mitsuo, who was an office worker for many years, now enjoys a career as a full-time writer, after a novel he wrote in his spare time won recognition. His latest work has also been well received, and a book-signing session is held for him to meet and greet fans. However, upon glancing at the waiting line, he is stunned to see his first love, Izumi Oikawa, who he had once promised to marry. She now lives in Europe but has returned to Japan on a business trip, during which she stumbled across Mitsuo’s signing event. He makes quick work of the session, telling Izumi he wants her to meet someone, then takes her to a small jazz cafe. Izumi takes one look at the proprietor’s face and is astonished: it is Lily, the greatest love of Tora’s life, who she met on the island of Amami Oshima over 20 years ago. Reunited after so many years, the three share their dearest memories of Tora.
As they talk, Mitsuo and Izumi sense a warmth growing between them.
Later that night, Izumi visits Kurumaya...