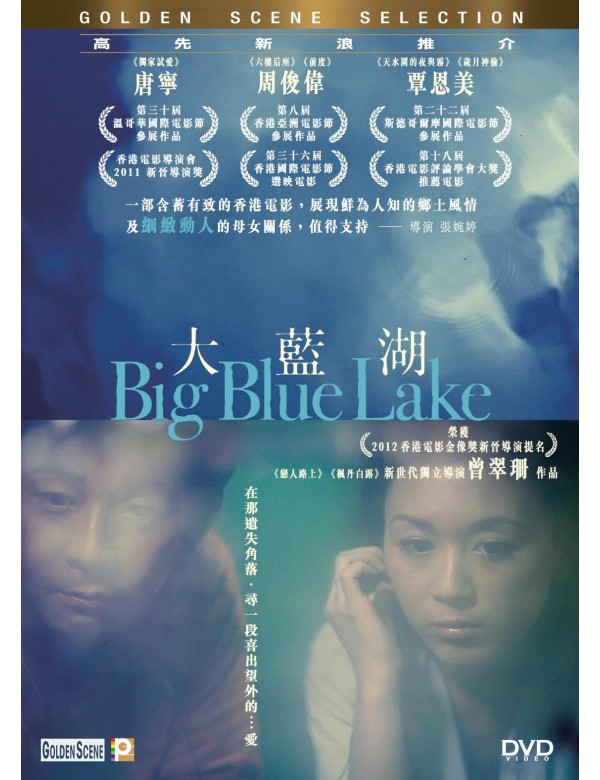 HKD$19.00
Title: Big Blue Lake
Director: Tsang Tsui-Shan
Starring: Lawrence Chou , Leila Kong , Amy Chum
Type: CHINESE
Genre: DRAMA
Category: I
Year: 2011
Synopsis:
Set in Ho Chung Village, Sai Kung, Big Blue Lake borrows the long historyof its location to tell a story that is at once realistic and dreamlike. Charting the soul-searching journey of its two protagonists (played by Leila Kong and Lawrence Chou) to the Big Blue Lake entrenched in their memories, the film exquisitely andlightheartedly portrays the transience of people and places, whilehighlighting the permanence of love and family. As her third filming project in the Sai Kung district (after the multimedia work “All About My Village” and the short “The Life and Times of Ho Chung Village”), Big Blue Lake is as much a continuation of Tsang Tsui-Shan’s interest in romantic tales as it is of her deep affection for the area she grew up in. The stylistic blend of sensibility and sensuality displayed in this film is distinctly the director’s own.
Set in a realistic world, Big Blue Lake is a story of love, family, and the changes that transpire in people and places. Cheung Lai Yee (Lelia Kong) leaved her origin, Ho Chung Village, in order to pursue success in the theatre world. A few years later, she had been through failures and she returned to her root to give herself a break. But she found everything there had changed. Cheung’s routine days became colorful with Lin Jin’s (Lawrence Chou) arrival. They were once high school classmates for two years before Lin moved away. The two then set off on a journey and Cheung secretly fell in love with Lin... While searching for old memories in the village, Cheung discovered that the acquaintances with people there created new stories and new memories. The characters in Big Blue Lake have done things they regret, but they finally find the strength to let go of the past and start anew.