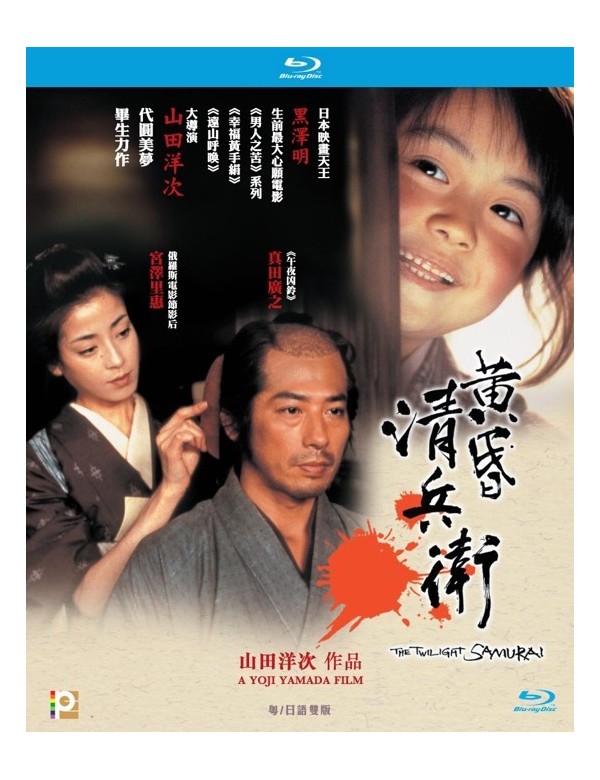 Seibei Iguchi is a low-ranking samurai of the Unasaka clan in Shonai Province of northeast Japan. His wife died of tuberculosis, a frequent cause of demise in those early years of hunger and malnutrition. With two daughters, Kayano and Ito, and an aging mother to support, he and his family must survive in austerity. The moment his daily work is over, he hurries home, refusing to drink or eat with fellow samurai, and concentrates on housework and moonlighting. Behind his back, samurai teasingly call him "Tasogare Seibei (Twilight Seibei)."

One day Seibei meets Tomonojo Iinuma, a childhood friend, and hears about Tomoe, the latter's sister, whose dogmatic husband Toyotaro is such a lush that she divorced him and moved in with her brother. The next day, Tomoe visits Seibei and the two enjoy reminiscing. As Seibei walks Tomoe home they encounter her ex, furiously determined to take her back. As fate would have it, Seibei, instead of Tomonojo who is a poor fencer, must duel with Toyotaro. On the day of their fight, Seibei, with only a wooden sword, easily beats Toyotaro who uses a real sword. As rumors of the duel rapidly spread, Tomoe takes to frequently calling at Seibei's residence. Seibei's daughters Kayano and Ito grow attached to her, and Tomonojo suggests that Seibei marry the girl. However, fearing he is too poor, Seibei declines, which puts an end to Tomoe's visits.

Meanwhile, strife within the clan has continued over who will be its successor. After the matter is resolved, Seibei is ordered to kill a retainer named Zenemon Yogo, who disapproves of the new lord of the fief. Seibei opts to refused, claiming he lacks the skill to perform the task. Told that the clan's orders are the same as the lord's, he reluctantly agrees. The next morning Seibei sends for Tomoe, describes his mission and asks her to help him prepare. During the tense period as they wait for the samurai coming for him, Seibei tells Tomoe that since his childhood, his dream has been to marry her. "I'm going to fight a duel," he vows. "I shall win and come back. If I then ask you to marry me, will you accept?" what Seibei does not know is that Tomoe has just made arrangements for an engagement.

Seibei heads to Yogo's residence, but to his surprise, he finds Yogo drunk. "Well, sorry for the trouble, but I am going to be on the run. The world is about to change, with totally different culture from the west coming in. the way of the samurai is now dead." The drunkard samurai was talkative. He starts his story of losing his wife of tuberculosis, and the absurdity of hara-kiri, which he did not believe in at all. Also losing his wife of tuberculosis, Seibei sympathizes with the samurai and tells his hardships. "I didn't even have money to give a funeral, and finally, ended up selling the 'life' of a samurai, my sword." With his words he draws the sword out of its scabbard, with reveals itself as only a wooden sword. Seeing this, Yogo's makes a sudden attack to Seibei. Seibei makes a move, and Yogo's blade barely missing him. Seibei tries to talk Yogo out of the duel, but Yogo Keeps on roaring, moving closer to Seibei, and makes his final attack…

It is in the evening twilight that Seibei returns home. Ito comes running out to welcome him. Seibei picks her up in his arms, and smiles. Then, a shadow moves from the house and Seibei stops. It is Tomoe, who just cannot stop her tears seeing Seibei's return.

… In a lonely grave in a hidden temple, it Ito, now old. The grave is Seibei and Tomoe's. the two married, but Seibei was killed right afterwards, in the Meiji Revolution war, with a gun. Still, he lived a happy life, surrounded by the people he loved, thought Ito.