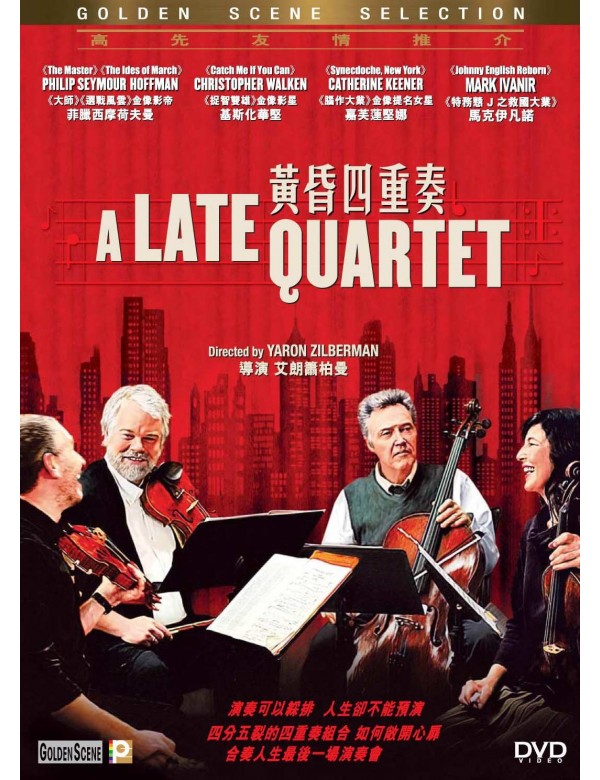 HKD$39.00
"A Late Quartet"
Philip Seymour Hoffman "The Master" "The Ides of March"
Christopher Walken "Catch Me If You Can"
Catherine Keener "Synecdoche, New York"
Mark Ivanir "Johnny English Reborn"
Directed by Yaron Zilberman
On the eve of a world renowned string quartet's 25th anniversary season, their beloved cellist, Peter Mitchell (Christopher Walken), is diagnosed with the early symptoms of Parkinson's Disease. When Peter announces he wishes to make the upcoming season his last, his three colleagues find themselves at a crossroad. Competing egos and uncontrollable passions threaten to derail years of friendship and collaboration. Robert Gelbart (Philip Seymour Hoffman), the quartet's second violinist, announces his desire to alternate chairs with first violinist Daniel Lerner (Mark Ivanir), after years of sacrifice and peacemaking for the benefit of the group. Robert's wife, violist Juliette Gelbart (Catherine Keener) has a particularly difficult time grappling with the tragic diagnosis, as Peter has served not only as a colleague, but as a dear father figure since childhood. When Juliette is unable to support her husband, their marriage is strained with a palpable tension that they can no longer ignore. Tossed into the maelstrom is their daughter Alexandra, a talented violinist in her own right. Like her father, she too decides to act on her desires. As the string quartet prepares to play Beethoven’s Opus 131 for what might be the members' last concert together, the seven movements of the piece echo their own tumultuous journey.