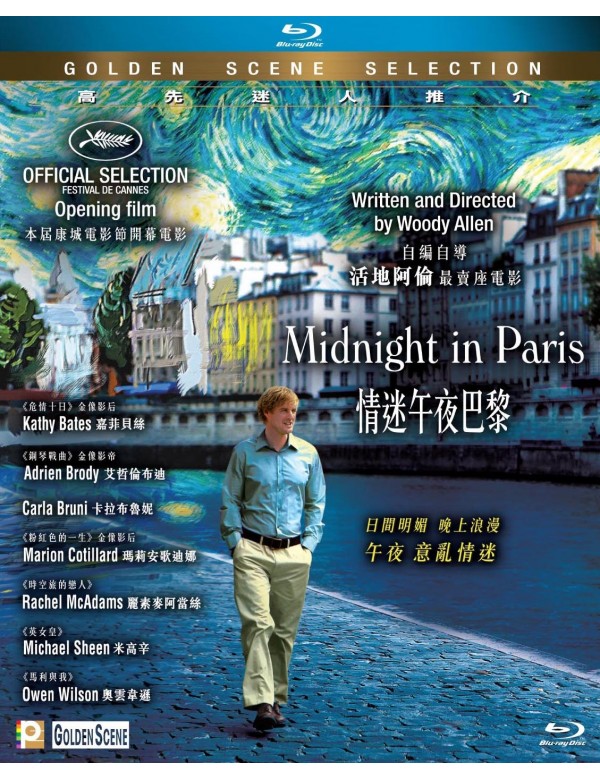 HKD$69.00
Title: Midnight in Paris
Director: Woody Allen
Starring: Kathy Bates/Adrien Brody
Type: ENGLISH
Genre: DRAMA
Category: IIA
Year: 2011
Synopsis:
MIDNIGHT IN PARIS is Woody Allen's valentine to the City of Light, starring Ernest Hemingway, Salvador Dali, F.Scott & Zelda Fitzgerald, Pablo Picasso, Luis Bunuel and Gertrude Stein, among others. This is a romantic comedy set in Paris about a family that goes there because of business, and two young people who are engaged to be married in the fall have experiences there that change their lives. It's about a young man's great love for a city, Paris, and the illusion people have that a life different from theirs would be much better.
Gil and his fiancee, Inez, are in Paris, having a vacation with family and friends. Gil is a successful but dissatisfied Hollywood screenwriter, now working on his first novel. Inez and the others are very demeaning both to Gil and the idea of him writing a novel. While alone walking at night, Gil gets in a car with some friendly strangers. Gil soon discovers he has been transported to the 1920s, an era he admires and idolizes in his to-be-novel. While there, he encounters and interacts with famous literary icons and artists who help him with his novel and his life. In the end he discovers that longing for a "golden past" is a recurring theme of any time period, as some prefer to be nostalgic about a romanticized past rather than accepting the messy present and uncertain future.