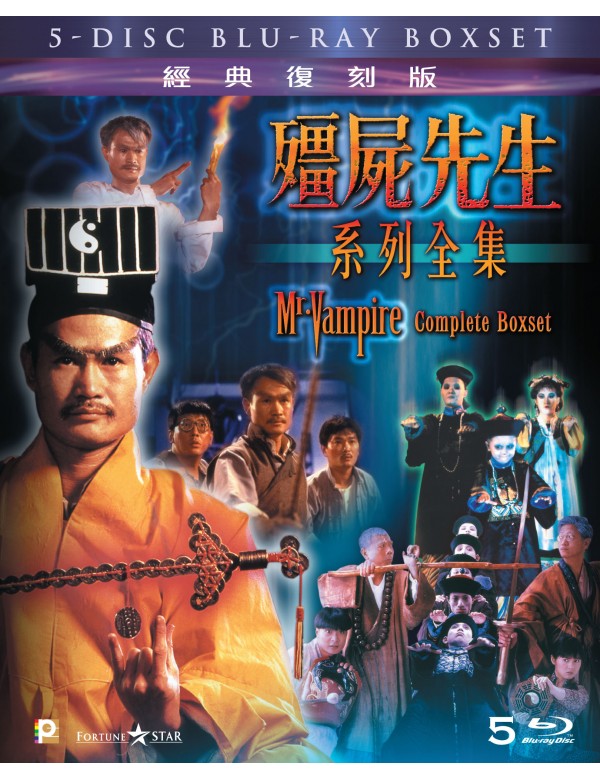 HKD$695.00
HKD$599.00 Save HKD$96.00
Mr. Vampire
Synopsis
Master Ko (Lam Ching Ying) faces the daunting task of re-burying a rich man’s father – in the hope that the new tomb will bring further prosperity. The frightening twist comes when the corpse comes back to life with a foul and vengeful netherworld gang. Desperately trying to right his wrongs, Master Ko finds himself sinking in deep trouble as apprentice Dan (Ricky Hui) turns into a vampire himself and apprentice Harry (Chin Siu Ho) is reduced to a week soul possessed by a fierce ghost.
Mr. Vampire II
Synopsis
The hopping vampires return as the sequel to the classic Mr. Vampire moves the setting from ancient China to modern-day Hong Kong, and includes a whole family of bloodsuckers. Inevitably, the little vampire comes into contact with a young brother & sister team who confuse him for an illegal Chinese immigrant. Lam Ching Ying returns in his trademark role as he attempts to control and safely transport the vampires to their graves…
Mr. Vampire III
Synopsis
Taoist Priest Uncle Ming has been cheating during exorcism and his two ghost companions to earn their living. There, Ming meets Master Nine, who is trying to defeat an evil Sorceress. Nine tells Ming that human and ghosts are not supposed to stay together. Therefore, Ming and his ghost companions part ways. However, they are later attacked by the Sorceress. Ming joins forces with Nine to stop the evil threat.
Mr. Vampire Saga IV
Synopsis
The Buddhist Monk and the Taoist Priest, both blessed with ghost-taming powers, are living up in the hill with their apprentice. Although the four of them argue a lot, they remain very good friends. One night, a coffin is struck by lightning and the dead body is now transformed to a vampire. The vampire is killing every single human on earth… The Monk and the Priest must do everything they can to save themselves.
Vampire vs Vampire
Synopsis
The Chinese exorcist is One-Eyebrow Priest. He leads a peaceful life of hermitage with his two bungling students and the mini-vampire. One day a ghost ship comes to the village and the priest is asked to catch the ghosts. He meets Sister Maria and her beautiful assistants. Life is no longer peaceful. The water becomes polluted. The priest discovers the pollutant to be a European vampire who is aided by a dead countess. The Priest’s Chinese exorcism fails miserably. All the while, he has to protect the vampire of his own. His students prove to be of little help, as they are determined to fall in love. How does the priest deal with the desperate situation? Will he succeed?
PANCB1809141