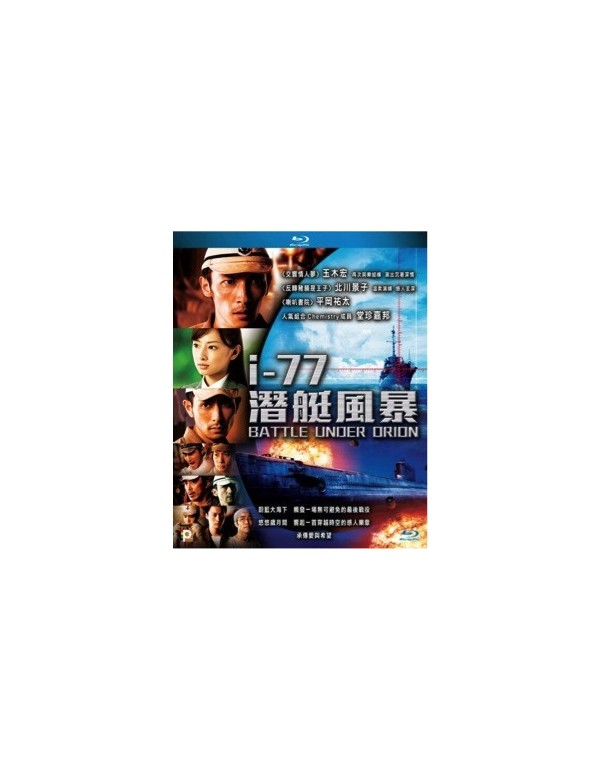 HKD$19.00
Title: Battle Under Orion
Director: Testuo Shinohara
Starring: Tamaki Hiroshi,Kitagawa Keiko,Hiraoka Yuta,Dochin Yoshikuni
Type: JAPANESE
Genre: WAR
Year: 2009
Synopsis:
The final days of World War II ── the ocean southeast of Okinawa. The Japanese last hope is entrusted on I-77, the last of the deployed submarines to strike at the U.S. Nacy's fuel-supply lines. Takayuki Kuramoto ( Hiroshi Tamaki), Commander of the I-77 is up against Mike Stewart, the captain of the U.S. destroyer Percival who has the finest record in the U.S. Nacy. As the I-77 and U.S. destroyer Percival begin a mutual hunt, the two captains bring all their knowledge and power to bear as, with lessening supplies of torepedoes and depth charges, they battle. Kuramoto, the lives of his young crew members in his charge, is forced by the difficulties of battle into a serious decision. With Midsummer Orion, a piece of music sheet, in his breast pocket, he sets out on a final battle that will mean life or death. August, 1945: the fuse is lit on a final battle to the limits of mind and body.