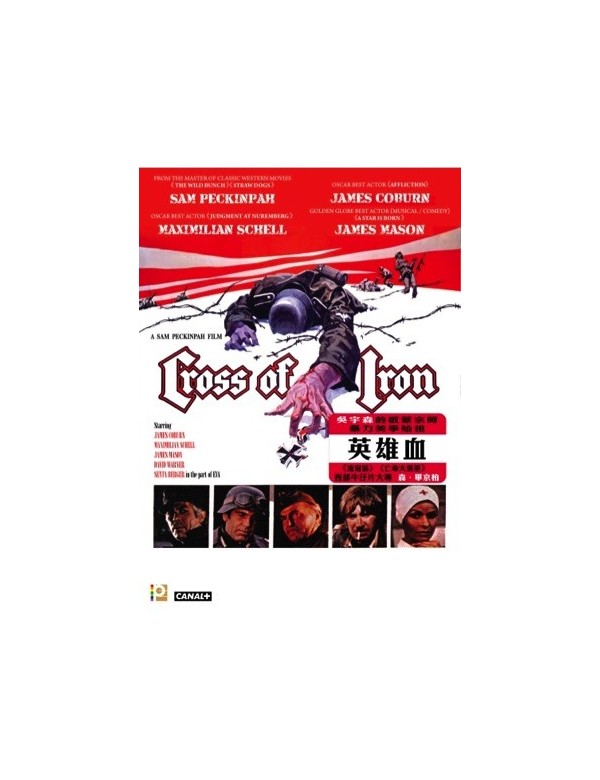 CROSS OF IRON is the only war film directed by master filmmaker Sam Peckinpah. With the same tenacity and style he brought to such classics as The Wild Bunch, Straw Dogs and The Getaway, Peckinpah delivers a riveting and violent tale of men on the front lines of battle. Set in 1943 during WWII, this explosive epic centers on Corporal Steiner (James Coburn), an accomplished but war-weary combat veteran leading a group of German soldiers on the Russian front. Steiners authority comes under attack when Captain Stransky (Maxlimilian Schell) takes over command of his troops. A Prussian aristocrat, Stransky has one goal in mind: to win the coveted Iron Cross, Germanys highest medal, at any cost. The two millitary aces soon face off in an intense and deadly battle of wills...The films end with Steiners hysterical laughters and a quote from Berthold Brechts play ── The Resistible Rise of Arturo Ui, Do not rejoice in his defeat, you men. For though the world has stood up and stopped the bastard, the bitch that bore him is in heat again. Highlighted by Peckinpahs trademark balletic violence, slow-motion, ultrarealistic battle scenes, and a top cast that also includes David Warner and Kames Mason, Cross of Iron blasts open the gates of hell (Newsweek) and affirms director Peckinpahs prowess as an action filmmaker of graphic mayhen (Variety). No less a film authority than Orson Welles called it the greatest antiwar movie since All Quiet On the Western Front.
PANDVD520869